The Gossip Booth of Radio Slumber is a digital project. It enables the ether of the website as a safe space for uttering secrets and whispering forms of gossip as a necessary form of leakage. Online visitors of can record themselves, and a slow fermentation script will process their recording to be added to a chat window as a safely censored text that hides all textual content. The traces of your recording emerge as speech-to-text gaps, unrecognisable utterances and the in-between. The software deletes the audio once the text has been generated, so your secrets are kept secret. The project is made with pocketsphinx, pydub, php, mp3redorder.js. 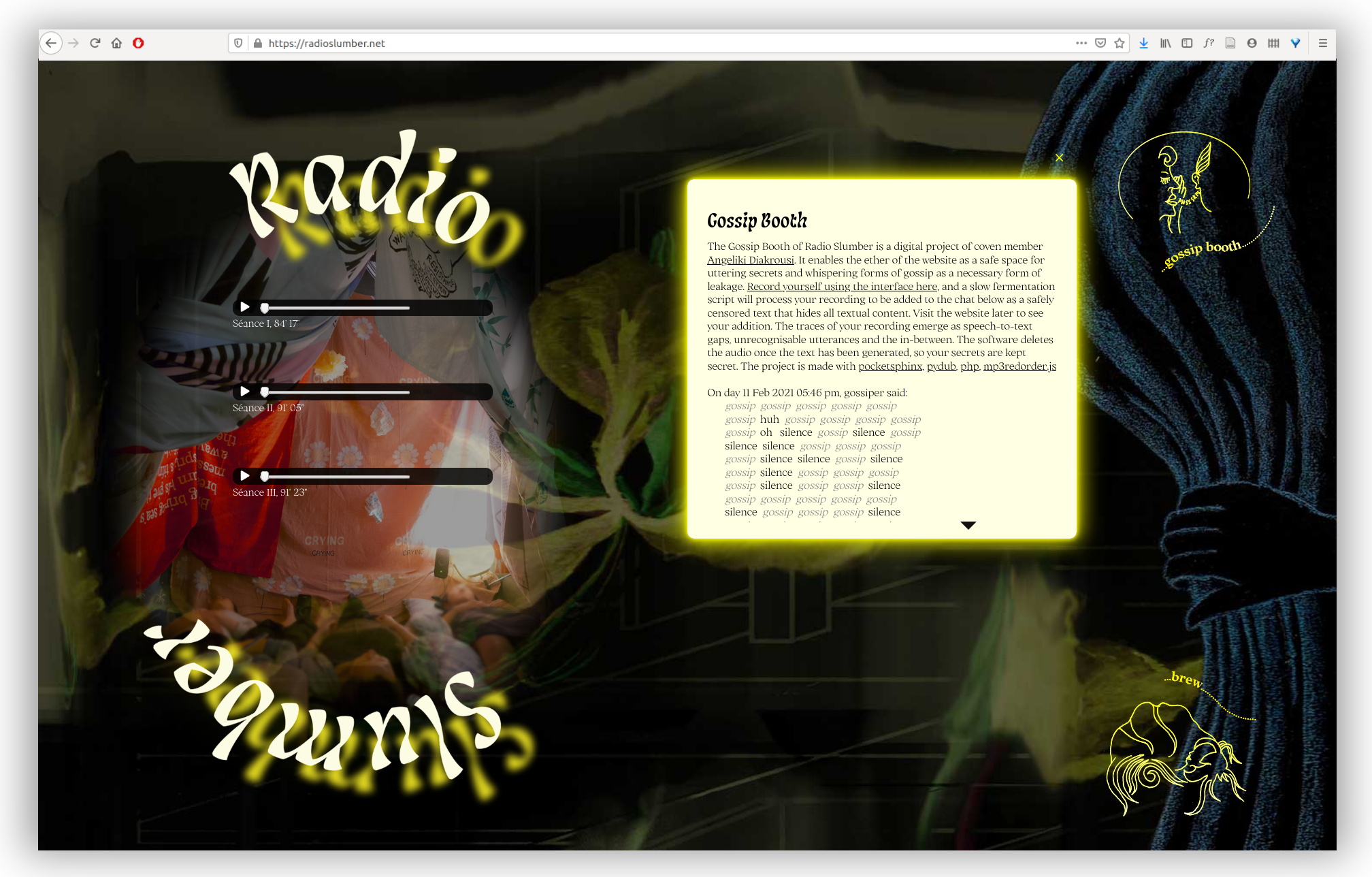 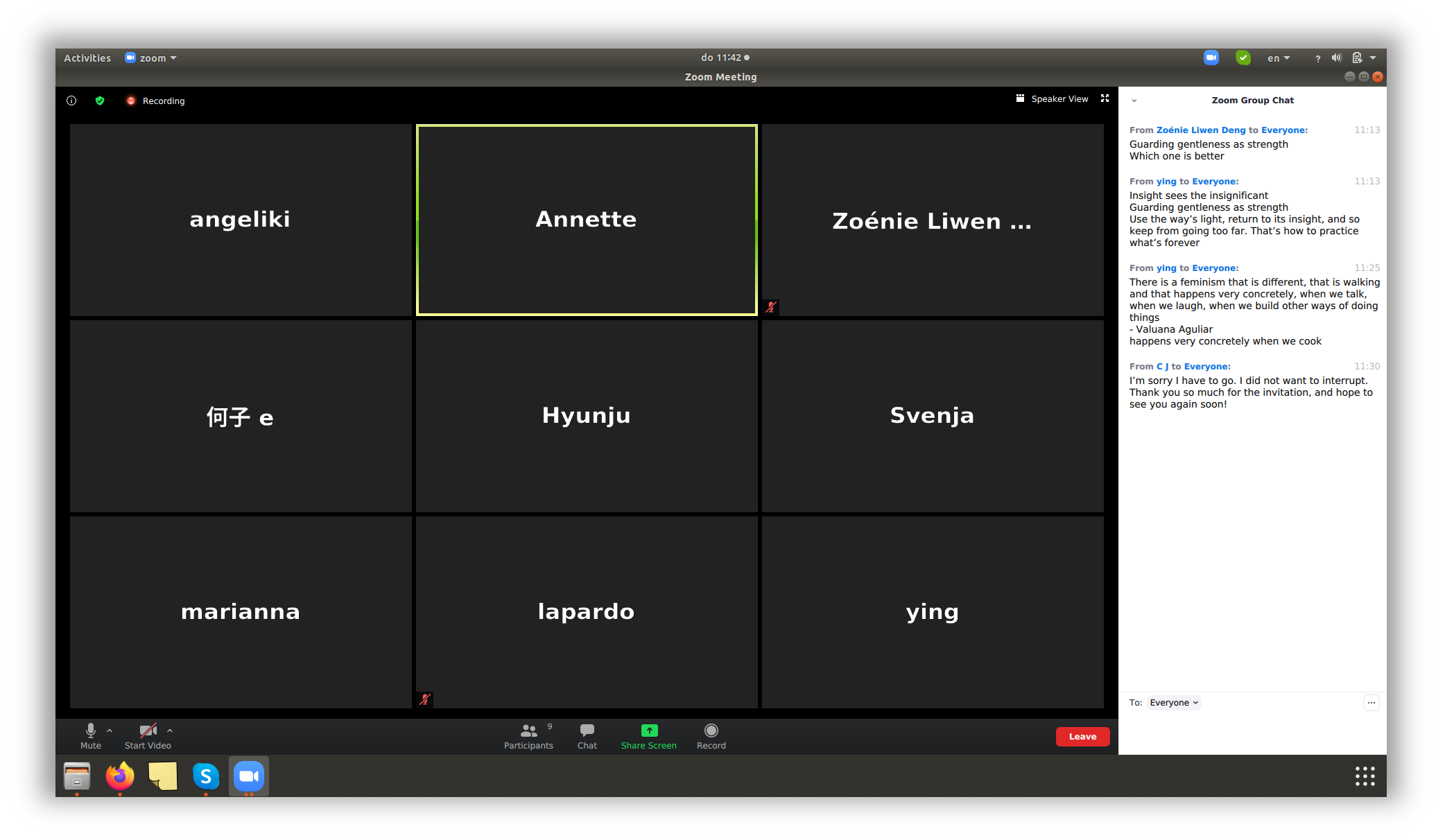 The Gossip Gaps is a composition made with a script that I developed and used in the Gossip Booth of Radio Slumber. A safe online space, situated in a Jitsi room, where the visitors can gossip about politics, food, language barriers, stories about migration, the state and discrimination or even curse the patriarchal, institutional and systemic power. The gossip leaks to the Radio Slumber and becomes public slightly distorted. It is edited by a speech recognition python script and it only contains in-between-the-words sounds. Laughter, pauses, uncertain expressions, breaths, sounds of discomfort and pleasure composes the audio. Because of different accents the script may have missed half of the words and allowed some meaningful sounds to go through. Gossip in any language can be a fast, low-in-volume way of speaking, sounding like murmuring often including slang. This way of speaking happening between immigrants may sound blurry to the ears of the natives in the land of migration. Without the understanding of the words the speaking becomes a melody, a sound missing the logical meaning. This may be annoying for the outsiders but at the same time it is a familiar, joyful, shared and supportive space for the ones that had to leave their home. Even more for the females that often don't have the public platforms to share their concerns and solve their problems, and they are not supported by the systems (legal, economic, cultural, political) they live in. The Gossip Gaps embraces these discomforts in the ear of some listeners and the fast murmurings of despair and pleasure.

[text from the website] RADIO SLUMBER is a three-part aural brew and online grimoire that casts its gaze out from a closed-door coven of potluck workshops + secret societies + spa retreats + fests of slumber (ᴬᴷᴬ ...pwsssrfs...) that took place at Motel Spatie in Arnhem, Netherlands, over the winter of 2020. This turn to the ‘endotic’ (as in Perec’s spatial and anthropological turn from the ‘exotic’) makes multi-dimensional inversions of the east-west dichotomy, strategically dissecting cultural theorist Rey Chow’s ‘fascist longings in our midst’. From RADIO SLUMBER’s audio book of spells, gossip whispers leak the accidents of intersectionalism and conjure—via the foundation of friendship—other practices of care from both near and far.